Earlier this year, I signed up for a 5k, both as a birthday gift to my much more athletic fourteen-year-old brother and an incentive to get back in shape after six years of good intentions.

One of my first steps was to buy a pair of tennis shoes. I hadn’t bought a pair in eight years, and as you can see in the picture below, they had already gained their fair share of mileage from ultimate Frisbee games, hiking, fencing, and, yes, running up to six miles a couple of times a week. 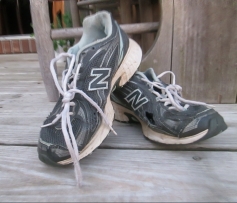 But that was college, and I was into my sixth year of teaching and first year of grad school. I remembered my orthopedist[1] telling me God had given us three areas to manage: physical, intellectual, and spiritual. “I’m more of the intellectual, too,” he said, “which is why I make my butt get out of bed every morning and run.”

And people say middle-schoolers don’t listen. Trust me, the fourteen-year-old me listened to his words way better than the twenty-four-year-old me, and the twenty-eight-year-old was about to feel it.[2]

With the urgency of multiple other tasks this semester, I didn’t start training until a few weeks before the race. People advised me to take it slow because I wouldn’t be as fast as I used to be, and someone I knew who used to coach track (and still runs for pleasure) said to Google “Couch to 5k” training programs.

Couch to 5k? It wasn’t as if I hadn’t been doing anything. I was managing migraines one to two times a week from the added computer work at both work and school, and a few days after submitting my twenty-five-page research paper, I was wearing a brace for carpal tunnel, which I called my unimpressive nerd injury. And I still had stacks of papers, tests, and journals on my desk to grade. It was as though I was running everywhere without actually running.

So less than a month before the race, I started with the walk-run method in our neighbor’s horse corral—twelve laps made a mile. A mile shouldn’t be too hard—I used to go for months without exercising and then run a mile. I’d be sore the next day, but it wasn’t as if I couldn’t do it.

The first few times, I accomplished a major cramp in my side by the third running lap. Even my back ached, and my arms felt heavy and sore, and I knew I was more out of shape than I’d ever been. Apparently being out-of-breath after a sprint up the stairs wasn’t evidence enough. But since when did running make your arms hurt? [3]

I don’t have asthma, but I have a tendency to hold my breath when I exercise because I’m concentrating so hard, which means each time I begin exercising again, I have to train myself to breath properly. I’ve only experienced wheezing in combination with maple trees and freshly cut hay. Springtime growing up in the middle of a farm with no central heat and air and plenty of yellow dust on my window seal meant lots of Claritin and tissues. My mom once made me breath in a brown paper bag.

But the day I finished my first mile with no walking breaks, I had failed to consider that the maples and apple trees were blooming. Not long after I enjoyed the satisfaction and relief of completing my first consistent mile in years, I felt a tickle deep in my chest, and I started coughing and wheezing during my cool-down. I asked my ten-year-old brother, who does have asthma, if he had his inhaler, and he looked at me with his big brown eyes and a dimpled grin that said, “Suck it up, buttercup.”

Between the high pollen count and lack of overall stamina, I decided to do some indoor cross training on a stationary bike plus sit-ups, push-ups, yoga, and a few exercises I remembered from previous years of Tae Bo and P90x. (All of which would floor my eighth graders.) I realized it was no longer okay to exercise thirty minutes after eating; I needed about two hours to avoid both cramps and indigestion, and I remembered that certain foods hurt worse than others. Water was my new best friend, but like a good Baptist, I’ve always been terrible about drinking. Thus began little changes throughout the day for the sake of half an hour in the evening. I improved, but I was still slow. So slow that I had to tell my brother not to worry about waiting on me the day of the race (so much for the quality time bit) and so slow that I realized the reason I didn’t feel any breeze wasn’t the weather but because I used to be that much faster.

The week of the race, I could bike eight miles in thirty minutes with some resistance, which wasn’t impressive, but it let me know that I could at least endure long enough to run (perhaps) a thirty-minute or so 5k. I wasn’t looking for speed; I was looking to keep moving and not get a cramp or have such a hard time breathing I had to quit. I kept having Anne Shirley-like imaginings of being carried off on a stretcher with an IV-bag and an oxygen mask. I prayed for a low pollen count, wimpy as it sounded. So far, my running distance had only increased to a full mile, and I accepted I might just have to walk the hills and run the rest—if I could do that.

[1] I have idiopathic scoliosis and had to wear a brace for three years as a young teenager. My doctor emphasized being active more than anything else to help my back. He once said, “Next time you come in, I want to see Linda Hamilton.” I had no idea who that was but assumed it was a model and thought he was telling me to lose weight. Then he explained, “She’s the Terminator’s girlfriend. She’s buff.”

[2] So, pushing thirty isn’t that bad, but at least you understand how wimpy I’d become. I will never forget my grandmother not understanding my parents’ aches and pains they complained about in this early forties. She was seventy, and turned a summersault in our living room floor that summer.