Niggle was a painter. Not a very successful one, partly because he had many other things to do. Most of these things he thought were a nuisance; but he did them fairly well, when he could not get out of them: which (in his opinion) was far too often. (Tolkien, “Leaf by Niggle”)

A few weeks before Christmas, I thanked a friend for posting a blog interview featuring a writer who was also a busy wife and mother. (You can actually access the article here.) The article was truly encouraging, and my friend’s response was meant to be: he asked if I would be interested in being interviewed myself. There was one problem: me. Once more, I confessed to a far more successful writer friend that I hadn’t been writing lately and couldn’t promise to be much of an inspiration. As I clicked send, I hoped my brevity wouldn’t reveal the grumpiness and defeat the offer had unwittingly triggered.

For starters, I hadn’t been working on a major writing project or writing the second part to a blog post I wrote back in September. (Though I have been pondering and reading in preparation for it. Sometimes I present myself with problems to write about that I haven’t worked out enough to even speculate, and while we never fully understand, it seems a waste of everyone’s time for me to babble. Writing is often a process of discovery for me, but it’s not always a process I believe everyone should always see, especially in the early phases. I’ll be sharing more about that in a future post.) I hadn’t written as many cards, letters, or even emails. I had written in my journal about four times in five months. All the advice about making yourself write and creating and managing time and setting boundaries swarmed in my mind. Time wasn’t an issue for my writing life only, but for family and teaching. Whenever I feel I truly don’t have time to write, I realize all the others things I feel I should be doing but don’t have time for because of what I sometimes call The Amoeba. Here’s a picture of about ⅛ of the creature, and I’m sure many could identify it and will probably feel cold chills when they see it: 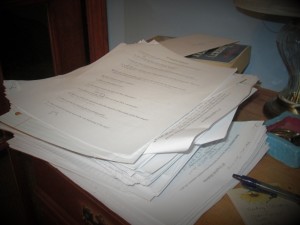 In the past, grading papers has threatened to take over my life. (I’ll be writing more about writing and teaching in the future.) This sounds like an overstatement, but it really isn’t, especially when your student body doubles, as it did for my school this past fall. I do enjoy actually teaching, but by October, many things began to get shoved to the side in favor of paper grading: my sister’s piano lessons, paper comments for a home-school friend’s children, staying in touch with friends, getting my oil changed, scrubbing the shower, and by November, not only was I behind on my never-ending stack of grading but also my reading assignments for my own class. Both Thanksgiving and Christmas I spent in the bed sick with a respiratory virus. Needless to say, I was feeling quite a bit like Tolkien’s Niggle, a painter who fears he will never finish his masterpiece due to a multitude of interruptions.

It was probably a week or two later when I realized that when I said I hadn’t been writing much lately, that wasn’t really true. In the midst of one of my pity parties, I realized I had actually managed to write every week‒and not just lesson plans, parent emails, and comments on students’ essays. I’d been writing about literature, a paper a week, for my master’s along with responses to discussion posts with other busy writers and thinkers who have families and jobs.

I then remembered that the Oxford don C.S. Lewis took care of the cantankerous Mrs. Moore, attended boring meetings with his department at Oxford, and housed children evacuees in WWII. Dorothy L. Sayers worked as a secretary, wrote advertisements, and taught intermittently to pay the bills. Flannery O’Connor had lupus. Harper Lee dropped out of law school, and while some friends did support her for a year so she could live in New York and write a novel, it was for one year. Tolkien, a professor and father of four children, was known to go for months without writing, and it was while grading a stack of boring exam papers that he wrote the first line of The Hobbit. It was also during a period of difficulty with Rings that he wrote the short story “Leaf by Niggle.”

So, in the future, I’d like to look at the story of Niggle along with the lives of successful writers I love who were also very busy and even unsuccessful. I’ve made a couple of promises in this post regarding future writing, and so I’ll end with a list of titles I’ve planned for the future:

When You Haven’t Been Writing Much Lately: An Analysis and Application of “Leaf by Niggle”

The Busy and Sometimes Unsuccessful Lives of Well-Loved Authors:

Books I Want to Read

Online Resources for Creative Artists and Those Who Simply Enjoy Thinking

On Writing and Teaching

Myths I’ve Believed as a Writer

Order, Truth, and Writing: Lessons from a Puzzle